The name of our youngest and probably most determined volunteer is Poppy. She’s just 9 and since 2017 she has managed to be awarded 4 Blue Peter Badges! The last one she has just been awarded is the Diamond Blue Peter Badge! That’s the special edition badge for 2018 created to celebrate Blue Peter’s 60th Birthday that she told us she wanted to get.

Poppy Hendry has taken part in numerous Action for Sick Children events such as the bag packing days in local supermarkets and the Sponsored Scoot last February. In the meantime, she has been awarded the first prize in the children’s category of the International Poetry Competition 2017. She has also kept applying for her Blue Peter Badges in her free time. She competed against children all around the country to get them. Her achievements show her determination, creativity in inventing new poems, stories and letters to attach to the applications and, last but not least, her passion for helping others. 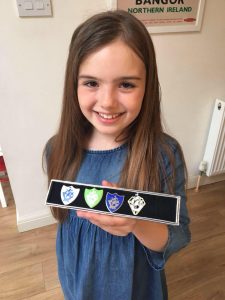 Poppy showing us her badge collection

Poppy was over the moon when she received her Diamond badge! She went on and on telling us how happy she was that she was able to get the limited edition badge for the 60th anniversary of Blue Peter. It’s the only badge with a different shape she explained me. She loves Blue Peter and she has already applied for the Purple Badge!

We hope Poppy’s work and determination will stimulate other future volunteers to join Action for Sick Children’s events. Thus, either by directly volunteering or by donating a contribution for the Dental Playbox school sessions or the 2018 MPOPA goal, our team will be very happy!

So, if you want to know more about what we do…

What is the Dental Playbox®?

Our Dental Playbox® Project started in 2007 in response to the alarming increase in dental decay in young children. It continues today to not only reduce this issue but also to stem the ever-increasing numbers of young children becoming hospitalised due to tooth decay. According to statistics, over one third of children in the UK have tooth decay by the time they start primary school!

The project’s key aim is to teach young children about the importance of good oral hygiene, healthy eating and to prepare them from an early age for a trip to the dentist. This is all done through the powerful medium of play by our Facilitators during their schools, pre-schools and nursery sessions.

If you would like to ensure the Dental Playbox® receives support, you can donate via our JustGiving page by clicking here. Alternatively, the project accepts donations of toothbrushes and toothpaste to include in brushing bags. You can drop off your donation at the Action for Sick Children office: 10 Ravenoak Road, Cheadle Hulme, SK8 7DL.

In 2018, Action for Sick Children are aiming to provide ten more MPOPA boxes to hospitals across the UK. The total cost of providing the ten boxes is £25,000! If you would like to make a donation to the 2018 appeal, visit the JustGiving Page.